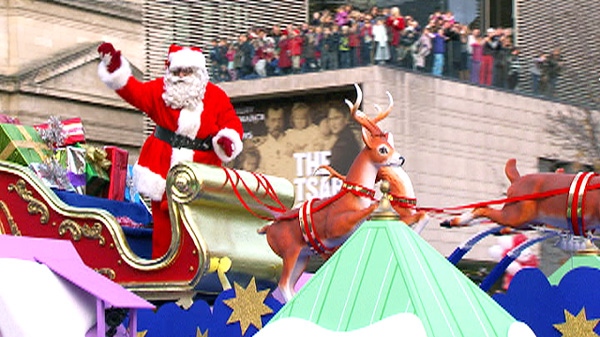 Just 39 days until Christmas so get out and enjoy the official opening of the Christmas season with the arrival of Santa Claus who always appears on the last float! Community parades usually include themed floats, dancing or marching groups and bands playing Christmas songs.

Minden Santa Claus Parade
November 24 2018
Meet Santa and his friends as they travel through the downtown area in Minden.  After the parade, you can meet Santa Claus and have your picture taken with him.  This event takes place on the last Sunday in November.

Muskoka Santa Clause Parades
Muskoka is known far and wide as Santa’s summer home, as thousands flock every year to Bracebridge and the 45th parallel to visit Santa’s Village Family Amusement Park. During November and December, Santa comes back to Muskoka for one last visit before he heads back to the North Pole to prepare for Christmas night. The charming town parades across Muskoka are a popular family activity for locals and visitors to the area.

Santa Claus Parades in Ontario’s Lake Country
Come see Santa in one of Ontario’s most picturesque regions.  With radiant lakes and rivers and an array of activities for all to enjoy year round, located just one hour north of Toronto, on the shores of Lake Simcoe and Lake Couchiching.

Santa Parades in the Ottawa Valley
Visit Santa in Ontario’s adventure playground. With more than 2.4 million hectares (6 million acres) of pristine waterways, rolling woodlands and forests, our river and trail networks challenge and test the might and mettle of every explorer to our region.

Minden Hills Santa Claus Parade
November 24, 2018
A great way to gather up some of the Christmas spirit during this annual event where kids can meet Santa and get a free hot chocolate while they wait!

Lakefield Santa Claus Parade
November 18, 2018
Bring the kids to Queen Street for treats, floats, clowns and, of course, the man in red!

Fenelon Falls Santa Day
November 24, 2018
Visit with Santa at his house starting at 10 am if he’s there, or, you may find him at his workshop in the new Community Centre. Come see Santa for a free photo an a candy cane treat. Join us for a full day of family activities.

Barrie Santa Claus Parade
November 17, 2018
The 2018 parade is scheduled for 5pm on Saturday, November 17, 2018. This years theme is “Christmas Past, Present and Future”. Registration for floats will be available closer to the event date.

Angus Santa Claus Parade
November 17, 2018
Ho! Ho! Ho! The annual Angus Santa Claus parade will be held on November 19th at 10 a.m. Floats will be travelling along Mill Street to the Essa Arena. Don’t forget to stop at the arena for hot dogs, cookies, drinks and your photo with Santa.

Bradford West Gwillimbury Santa Claus Parade
November 17, 2018
The parade attracts thousands of spectators each year to enjoy the show under the stars. The parade features numerous diverse floats from the community beginning at Bradford High School and travelling east on Holland Street, finishing at the Bradford & District Memorial Community Centre.

Midland Santa Claus Parade
November 24, 2018
The parade will be happening at 11am and will commence from Little Lake Park down to the bottom of King Street. The theme of this years parade is ‘Memories of a Childhood Christmas’.

Waubaushene Santa Claus Parade
November 25, 2018
Food & Toys will be collected along parade route & Fire Hall; Following the Parade everyone is invited to the Fire Hall for a Community Gathering including refreshments, fun and a chance to visit Santa

Festival of Lights & Santa Claus Parade
Pentanguishene
December 1, 2018
A dazzling display of lights awaits you during the Town of Penetanguishene’s Festival of Lights Celebration for the official lighting of the Town’s Christmas tree. Twinkling lights and candles light your way to great fun and family actives that will spark the spirit of the season for all to enjoy.

Bala Santa Claus Parade
November 17, 2018
Parade winds through the streets of Bala. Visit Santa after the parade at Bala Community Centre – plus a free skate for all at the arena!

Gravenhurst Santa Claus Parade
November 24, 2018
The Parade will begin at 11:00am at the Gravenhurst Legion and then continue through the main street on Gravenhurst.

Mactier Santa Claus Parade
December 2, 2018
The Lions Club of Mactier presents the annual Mactier Santa Claus Parade on Sunday, December 02nd starting at 1p.m. at the Lions Hall and travels up High Street onto King Street and ends back at the Hall. Join the Lions for hot dogs, hot chocolate, free skating and a visit with Santa at the Community Centre following the parade.

Baysville Santa Claus Parade
December 9, 2018
The only parade that goes around twice. Starting at 1pm.

SantaFest
Santa’s Village, Bracebridge
December 8 & 23, 2018
Santa’s back in town for a few days this December! Come join us for a fun filled Winter Edition of SantaFest – with some of Santa’s favourite winter activities like gingerbread cookie decorating, petting zoo, scavenger hunt, ornament making, marshmallow roasting, Christmas crafts and who could forget – a visit with Santa!!

Cobourg Santa Claus Parade
November 18, 2018
The Santa Claus parade is presented by the Lions Club of Cobourg.
Letters to Santa and non-perishable food donations will be collected along King Street from D’Arcy Street to William Street

Orillia Santa Claus Parade
November 18, 2018
The largest Christmas parade north of Toronto! Help welcome Santa as over 100 floats and bands lead the way for him through Downtown Orillia.

Help Santa Toy Parade
November 17, 2018
Ottawa
Every year since 1969, the Ottawa Professional Fire Fighters’ Association has been organizing the Help Santa Toy Parade and collecting toys along the parade route for distribution to the less fortunate children in Ottawa-Carleton.The parade has evolved into a significant event drawing tens-of-thousands of people who line the Parade route and share their generosity. Participants are entertained to the sights and sounds of floats, bands and clowns produced locally and from around the Province.